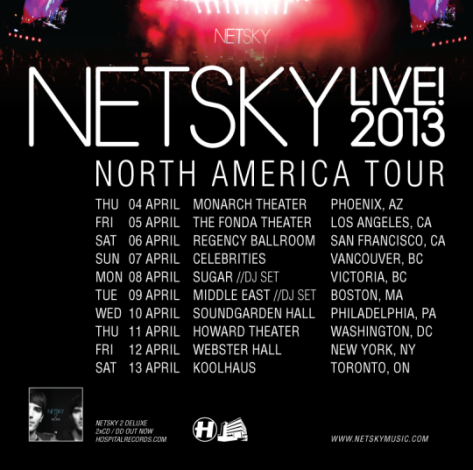 Back before EDM culture was mainstream, Philadelphia was the mecca of domestic Drum & Bass music. Weekly events like Platinum at Fluid Nightclub, and Concrete Jungle packed fans in to see some of the biggest names in the biz like Roni Size, Goldie, Andy C, and Aphrodite.

While today’s electronic music fans tends to gravitate more towards house, trance, dubstep, and trap, there is a new wave of artists producing and playing top-notch Drum & Bass music. Of those doing it, none do it quite like Belgium’s Netsky.

His rise to fame has been swift yet well deserved, earning him global praise from fans and peers alike.

In 2012 he debuted his Netsky Live! show which features a full band. On Wednesday, April 10th, Netsky Live! will roll into Philly for what promises to be an amazing show at Soundgarden Hall. Netsky Live! will showcase selections from his most recent album “2” and will prove to be a night that Philly will be talking about for a long time.

Independent Philly will be there to cover the show and we hope you’ll join us for this can’t miss event!

We highly suggest buying advanced tickets to gain faster entry to the venue, save yourself a few bucks, and save yourself the heartache when this show sells out. If you’re feeling lucky, you can also enter our contest to win tickets!